I get along with most people. Most people get along with me. But every once in a while I’ll run across someone evil. Cruella d’Vil kind of evil, soap opera villain evil. You know the type. Smart, driven, and friendly on the outside, but on the inside, a mean spirited, back stabbing, manipulative, soul sucking witch, with a capital B. 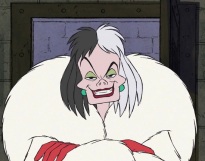 Usually, I see them coming and head the other way. But recently, I walked smack dab into a couple of bad ones. One female, the other male. Their gender helped to determine their motive and aggressive styles, but the effects of their nastiness were very similar.

I have to believe that Cruella, was manipulating the male, because he was not smart enough to do much more than yell and scream (literally) and act like a schoolyard bully. It was a unpleasant situation and frankly a waste of my time, money and effort. I’m glad to be free of it.

But that isn’t the point of this article, just the impetus for it.

Back in the early 90’s, I had the pleasure of being asked to teach art at a local elementary school.  It was a new school in our growing community and they needed a part time art teacher. I had been teaching for a while at my gallery. But, never in public school and never six hundred students-twenty five at a time.

I learned a lot my first year from the principal and other teachers. I learned more from my students. The most important thing they taught me was: they will listen if you whisper.

Being an art class, the students claimed a certain sense of freedom from the regular classroom rules. That and the fact they could smell a new teacher a mile down the hall, evoked a collective, “let’s see how much we can get away with…”

It was only a few days into the school year when I admitted to myself, I had no control over them. I didn’t know what to do when my class refused to settle down. Boys were shouting and sword fighting with paint brushes, girls were squealing and painting their faces to look like makeup. It was chaos.

I tried ringing a bell, holding up my hand, putting my fingers to my lips, writing names on the board and even yelling a little myself. None of those techniques met with success.

But as soon as I walked over to a student in the middle of the class and started to speak in a low voice about a painting I was working on with a warrior queen and evil shape shifters, the class got quiet.  Row by row, student by student, they started to listen. As I gained their attention, I started asking questions: “What color do you think the eyes should be? How would you transform the shapes? Should the queen have magical powers? What else would you add?”

As long as I whispered, they spoke in a low voice too, in turn, and in awe. They were excited to have input on such a cool idea. Each week they would ask about the painting and offer suggestions. They wanted to create their own “story art” and did so in a focused, calm manner. They seemed to connect the whisper with the painting. Did they still get a little crazy sometimes?  Sure, but all I had to do was make them want to listen by whispering about an interesting idea.  I love working with children. They are so open, so eager to learn and offer up their ideas in an open and ungarnished way.

Adults, not always the case. I forgot the power of a whisper in my recent experience. Although, I’m not sure any amount of whispering would have worked. Some of us, at a certain point in our lives, close ourselves off to listening, exploring and learning, and resort to nasty behavior. Next time I get in a toxic situation, I will speak in a low voice, share ideas, listen, and observe. Perhaps I can get others to build up, not tear down and offer solutions, instead of creating problems. If not, I will pick up my marbles and go home; another lesson I learned from children.